Just added to your cart

THE EVOLUTION OF THE GOLF CLUB

Since the inception of the game of golf, players have continually tried to improve upon their equipment. The earliest golf clubs were initially carved by the golfer themselves and typically out of wood. Golfers soon turned to skilled craftsmen to produce higher quality equipment. The first record of commissioned golf clubs was by King James IV of Scotland, who hired William Mayne, a bow-maker, to craft him a set of clubs and made him the Royal Club Maker.

In the 1500s a set of clubs consisted of: a set of play clubs, “longnoses”, for driving; fairway clubs or “grassed drivers”, for medium range; “spoons” for short shots; “niblicks” similar to wedges; and a putting “cleek”. These golf clubs were made up of wood with the shafts being made from ash or hazel and the club heads being made from tougher wood like apple, holly, beech or pear. The club head would be connected to the shaft with a splint and then bound with a leather strap. 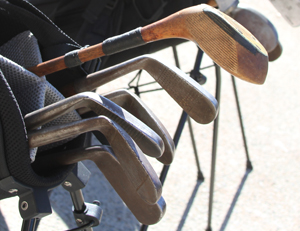 With the introduction of the “featherie” golf ball in 1618 golf clubs continued to be made with wooden heads, although forging iron into the head was possible, because of the delicacy of the featheries. The wooden clubs were expensive due to the time and effort that went into making them and they were prone to break. This high cost of the clubs made the game of golf an activity reserved for the higher class. Club-makers experimented with different materials on the club face, such as leather, metal, bone fragments, and other materials to increase distance and prevent breakage.

Around 1750 the first club heads made of iron began to emerge from local blacksmith shops, used for “niblicks” or wedges. In 1826 Robert Forgan, a club-maker in Scotland, started to use imported hickory from America to make club shafts. Hickory quickly became the standard wood of choice for club-makers due to its availability and better durability.

In 1848 the “guttie” ball was introduced by Rev. Adam Paterson, which quickly made the “longnoses” or drivers obsolete. Bulgers emerged to replace the longnoses which had a bulbous head, resembling modern woods. By 1900, persimmon became the material of choice for wooden club heads, which was also imported from America. 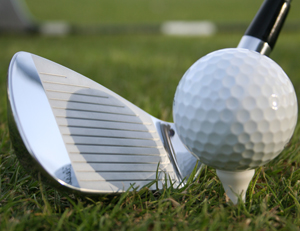 Back in the 1870’s with the advent of drop forging techniques factories were able to mass produce iron club heads, making them more consistent, lighter and better than the blacksmith made ones. In 1908 it was discovered that grooves on the club face could increase backspin and generate more distance.

The first few decades of the 1900’s saw a lot of experimentation and innovation in the club design. Around 1925 the steel shaft was introduced in the United States, although blacksmiths had experimented with them since the late 1890’s. The R&A, named from The Royal and Ancient Golf Club of St Andrews, is the governing body of the game of golf. The R&A finally legalized the use of steel shafted clubs after the Prince of Wales used them on the Old Course at St Andrews in 1929. The steel shaft provided for greater accuracy and durability. In 1931, after the R&A banned concave-faced wedges, Gene Sarazen invented the modern sand wedge which had a straight face and added bounce.

Up until 1939 it was common for a golfer to carry 20-30 clubs in their bag. However with the advancement of the steel shafted clubs the R&A introduced the 14 club rule in 1939, which limited players to only be allowed to carry 14 clubs. The traditional names of the clubs, like “niblicks” and “spoons”, were replaced by the standard numbering system used to this day.

There was little development and advancement for the next few decades. After World War II development of golf clubs were influenced by research into synthetic and composite materials. In the 1960’s, fiberglass shafts were tried unsuccessfully. In 1963 the casting method of manufacturing club heads was introduced, making clubs more affordable. In the 1970’s, Karsten Solheim invented the Ping Putter, which had more weight at the heel and toe which enabled golfers to putt straighter. In 1973 the graphite shaft was introduced which provided more rigidity, lightness and increased strength over the steel shafts. The more modern graphite shafts are manufactured with different materials to improve performance, such as boron to reduce twisting.

In the early 2000’s hybrid clubs, which are a fusion between an iron and a wood, emerged as an alternate to the harder to hit longer irons. Hybrid clubs are becoming more prominent and popular, especially for golfers with a slower swing like seniors or women.

The latest trends in woods are the use of titanium club heads combined with graphite shafts. With new designs continuing to evolve, however club head size for drivers is limited to 460cc. Another trend is the adjustable driver, which gives the golfer the ability to adjust the weight of their driver. This helps a golfer more easily hit a draw or fade depending on how it’s set. The golfer has evolved from making their own clubs from wood to now having them manufactured with the most advance technology, which gives them the ability to personalize it to their individual needs.